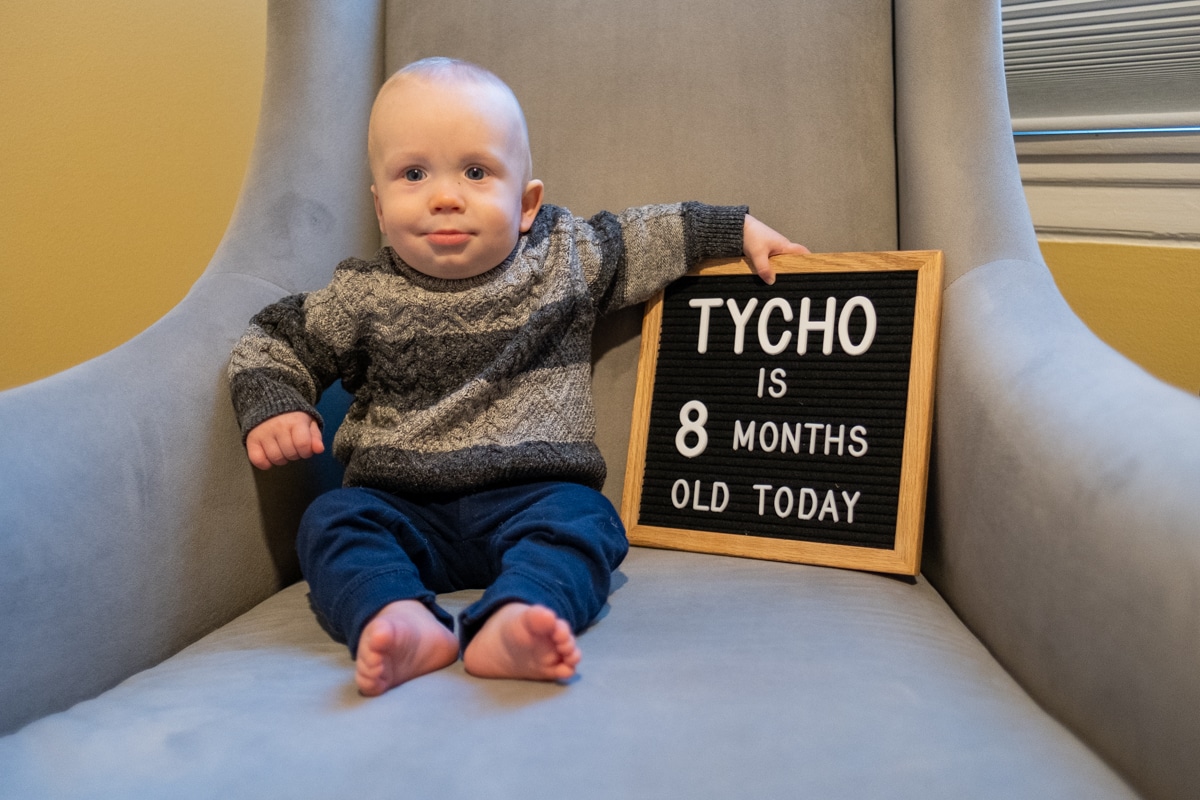 Can’t believe it’s already been another month! Lots of excitement in month 8, from teeth to new foods to travel to movement and back to more food. Really, all this kid does is eat. If he’s not breastfeeding, he’s eating, and if he’s not eating, he’s asleep. Somewhere in there he plays too….

We were pumped to go back to Maui with Aunt Brittany and Uncle Sean! Tycho had a blast hanging out with them and really liked working on his crawling muscles rocking back and forth on the condo carpet. (Apparently, there are reasons to have carpet in your house and not just rugs. Huh!) We went on more long walks and had some beach and pool time, it was lovely and relaxing. And Tycho ate allll the bananas and avocados he could get his little hands on and even had his first sushi!! (Tamago, natch.)

As soon as we got back he started dragging himself across the floor. He’s not full-on crawling yet, but he is entirely mobile and barricading the living room with pillows doesn’t work. Nothing is safe! He can’t stand to see any sort of tower, so as soon as you start building one he hauls himself over to knock it down just as you finish it (just like the SF transit center…). He’s managed all sorts of yoga poses during this process: plank, downward facing dog, three legged dog with/without a spinal twist, child’s pose, hands and knees, happy baby….

We also visited Grandma Anne in LA during some really crazy rain. Tycho had his first meal off the kid’s menu when we went out to Louise’s! We also had a chance to see Jacob, Rachel and Lev, which was a delicious pleasure. (Don’t worry, we didn’t eat Lev, but we did take the promo stills for our new hit comedy….) Can’t wait to see what he gets up to next month!

News this month: Tycho’s two lower front teeth have fully arrived! He’s almost crawling, so we’ve “graduated” from Mom and Baby yoga (sniff). We went to the zoo, the Academy of Sciences and music class for the first time and back to swim class. We started a nap schedule – mostly – and sleep has mellowed out to just one wake up a night – mostly. He slept 11 hours straight one night; it was marvelous and confusing. Yay!