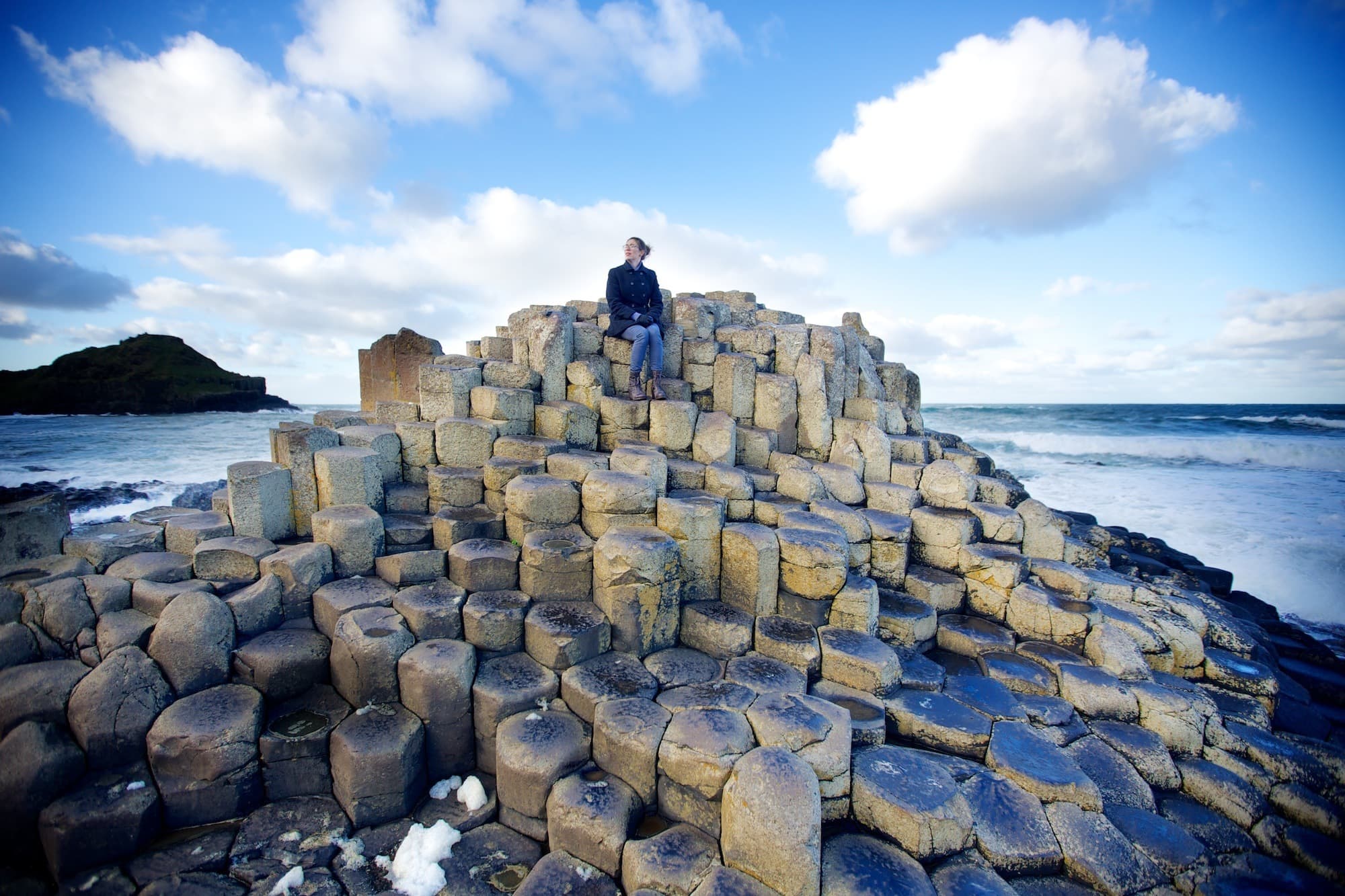 One of the only things we both agreed that we had to do on this trip was head to Northern Ireland to see the Giant’s Causeway, so after our second night in Dublin we got up early and got on the road! We started our sightseeing adventure with a stop at Brú na Bóinne, a beautifully massive Neolithic passage tomb built centuries before the pyramids and still bone dry.

Amazingly, the Stone Age people who built it not only used stones weighing over 1 ton from 30-70 miles away to construct it, they also perfectly aligned it so that the sun enters the doorway and illuminates the central chamber when it rises on the winter solstice. One of the neighboring passage tomb is aligned with the setting winter solstice sun; the other is aligned with the equinox, so its passage on one side is illuminated with the rising equinox sun and its passage on the other side is illuminated with the setting equinox sun. (Frankly, I don’t even understand how that would be worked out now let alone 5000 years ago.)

Kristan took her first turn driving in Ireland when we left Brú na Bóinne. As it turns out, driving on the left was nothing, but remembering how to drive in first gear was a much bigger issue! And the weirdest thing was that our rental car’s speedometer only shows speed in kilometers, not the usual mile/kilometer combination, which would be fine, except Ireland uses kph speed limits and Northern Ireland uses mph speed limits. Rain + math = fun times in Northern Ireland.

Right as we got to the little town of Bushmills, where the Causeway is located, it was raining and dark (at 3:30pm) and Kristan stalled on a hill and kinda forgot which lane she was in…. So the tasting room at Bushmills Distillery was super inviting and after handing off the keys to Max, Kristan proceeded to taste four different whiskeys. (Don’t get the 12 year, it’s not worth it.)

Our hotel for the night was the beautiful and old Causeway Hotel. Think classic English seaside hotel. Think Agatha Christie. Think Crisis at the Causeway…

It was dark when the young couple walked into the Causeway Hotel. The rising wind heralded the stormy night to come. Mark, a young entrepreneur whose dashing looks won him many admiring feminine glances, quietly handled their registration with the hotel receptionist, who briskly took care of all the details. It was obvious that his companion, Kristine, was also American – only they spend so freely on ill-fitting clothing too bright and gauche to be tasteful. They were loud and brash as they made their way to their room.

Sitting in the drawing room as they passed was Maude, a young Englishwoman who had but recently been a governess and now was taking a holiday by the sea, having come into an inheritance after the passing of her dear uncle. Her chaperone was a much beloved but very deaf aunt who spent most of her days attached to her knitting bag and only realizing her attention was needed elsewhere until “SARAH” was screamed for the third time directly into her ear. Maude was startled by the voices in the hallway, and turning to look, couldn’t believe her eyes. That was Mark walking by, Mark who she had known long ago in boarding school, in Switzerland, before her parents passed away in that tragic airplane crash and left her destitute after the resulting fire burned all of their money. How could it be?

But it was time for dinner and all the guests came in, thinking only of dinner and not the dreadful times ahead. Mark and Kristine were arguing, as usual. Mark wanted nothing more than Kristine’s attention and desire, while she was completely wrapped up in Sir Cooingsworth III, her pigeon, who accompanied her everywhere. Fiona and Seamus, an elderly couple at the Causeway Hotel in hopes that the sea cure would ease Fiona’s perpetual cough, shared furtive grimaces as they looked over at the two Americans quarreling. Aunt Sarah noticed them only when the waiter taking drink orders forced her to look up from her knitting. The pigeon looked cold, she decided. She would have to knit it a sweater vest.

Mark abruptly left the table and went to the bar for a whiskey, neat. Maude didn’t drink but knew she had to say something to him, so she timidly ordered a Guinness from the bartender and said hello while she awaited the pour. He recognized her immediately and instead of returning to their tables, they spent the entire dinner hour excitedly making their reacquaintance. Kristine vaguely realized that Mark wasn’t at the table, but since Cooingsworth was enjoying his seafood pie, dinner wasn’t of much concern.

The wind kept on and by the time dinner was through, it could clearly be heard despite the thick walls, the building shuddering every now and then in particularly strong gusts. The guests soon drifted. Back in their room, Kristine and Mark could hear something rat-, rat-, rattling outside their small patio. Mark ignored it for as long as he could, but once they had turned out the light, settled Cooingsworth on his perch, and climbed into bed, he suddenly jumped up muttering to himself and went out the door. Kristine fell asleep just as the rattling stopped.

But in the morning, Mark was nowhere to be found……

After a somewhat restful night at the Causeway Hotel, we had a spectacular breakfast and set off towards the windy coast and Giant’s Causeway. We were the first ones through the visitor’s center, and after walking down the road to the water, were the only ones at the Causeway for much of the morning. The causeway itself was smaller than we both expected, but Max still managed to spend two hours taking some 400+ photos. The rock formations looked like they belonged on another planet. Or a math textbook. Very cool either way.

After receiving numerous recommendations to do so, we then drove 15 minutes east along the coast to the Carrick-a-Rede Rope Bridge, another location managed by the National Trust (National Park Service for Northern Ireland, more or less). While not nearly as impressive as the Causeway, it’s a beautiful location and walk along the coast. The bridge spans 66 ft and is 98 ft above the rocks below – not bad for an old bridge used for fishing!

apologies to Agatha Christie and everyone who's written anything evercanon5dfinn mccool built a bridge and then left his camel behind like a punkfun not scaryignore thisno we don't arguewhy is it always Christmas here?
Comments