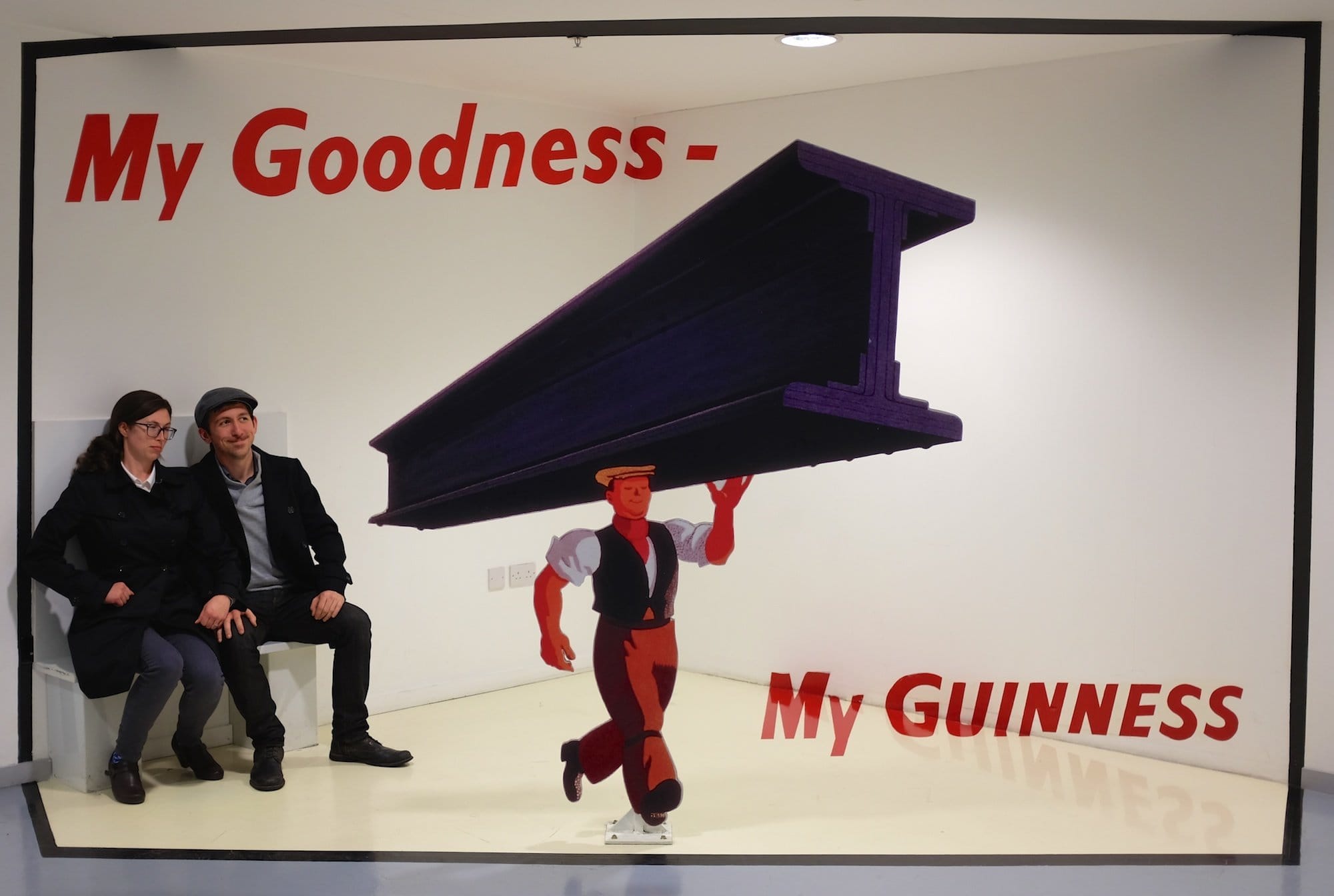 We’re in Ireland! It came as somewhat of a shock for us to suddenly be here when we’d been so focused on wedding planning and Thanksgiving eating. We left on Black Friday afternoon (first sidenote: super weird to think you are avoiding B.F. by leaving the U.S. and instead find that other countries are now doing it too thanks to globalization and multinational companies) and had a pretty easy flight to Dublin on Aer Lingus. We both were able to get some sleep so that when we arrived at 11am we didn’t just fall asleep behind the rental car wheel. (Driving on the left side of the road is fun!)

We wandered around the city centre, into the Trinity College courtyard and through the Temple Bar “cultural quarter”, then crossed the Liffey to get our first coffee in Ireland (that’s espresso, not Irish Coffee). As we went back to the river to meander, we looked at the sky and figured we might as well head to the Guinness Experience, since we had ended up fairly close and the darkening sky made us realize it wasn’t too early to start drinking. (Wrong! It was 2:30pm.)

Guinness was definitely an experience. They are certainly very good at tooting their own horn, but being rather indifferent to Guinness, our biggest takeaways were 1) “I can’t believe they literally designed the building interior to be of a glass of Guinness,” complete with a dark bottom and a light, foamy head, and 2) Diageo owns them, and Bushmills too. Not a lot independent booze-makers anymore. Overall the House of Bols was much more fun and engaging (and you don’t have to love them to enjoy it), but having a pint of Guinness in the 360 degree bar at the top of the building and looking out at all the city lights was pretty neat. (It was 4:30.)

Heading back towards our Airbnb apartment, we were enticed down a lane because of its beautiful Christmas lights, and accidentally stumbled upon Porterhouse, an independent brewing and pub! It took us a while to find a seat but we ended up overlooking the backside of the bar so while we sampled seven of their beers and ate dinner, we got some serious people-watching in. And a band starting playing trad / traditional Irish music too, so it was perfect. (The pub crawlers in ugly Christmas sweaters who wandered in added a nice comic touch.)

We kept following pretty Christmas lights – each lane and street had their own style – and found great ice cream and even our very first Christmas market! (Unfortunately underwhelming; it was essentially a county fair with mulled wine and bad 80s Christmas music.) We ended up walking over 10 miles so we were ready for SLEEP at that point.

Unfortunately, we didn’t get it, and then got too much- the pub below us blasted music til 2am, and then we didn’t wake up til 3pm! So much for our second day in Dublin :) We got some coffee and pastry at 3FE, which was so good we decided to come back for breakfast the next day. Then more meandering before an easy dinner at a vegetarian place led to the discovery of the Dingle Whiskey Bar, conveniently a quiet, classy bar attached to a pub, so we had incredible ambiance with just the right amount of hubbub from pub. We hit up 37 Dawson street for a couple of great seasonally themed cocktails (and to be amazed by an Irish woman drinking Coors Light … On ice… From a bottle… When the bar had it on tap) and then got home after our pub was closed, so we could get some normal sleep!

ahhhh stay on the left!!canon5dfollow the lightsgimme a pint of the black stuffgotta get our steps in
Comments