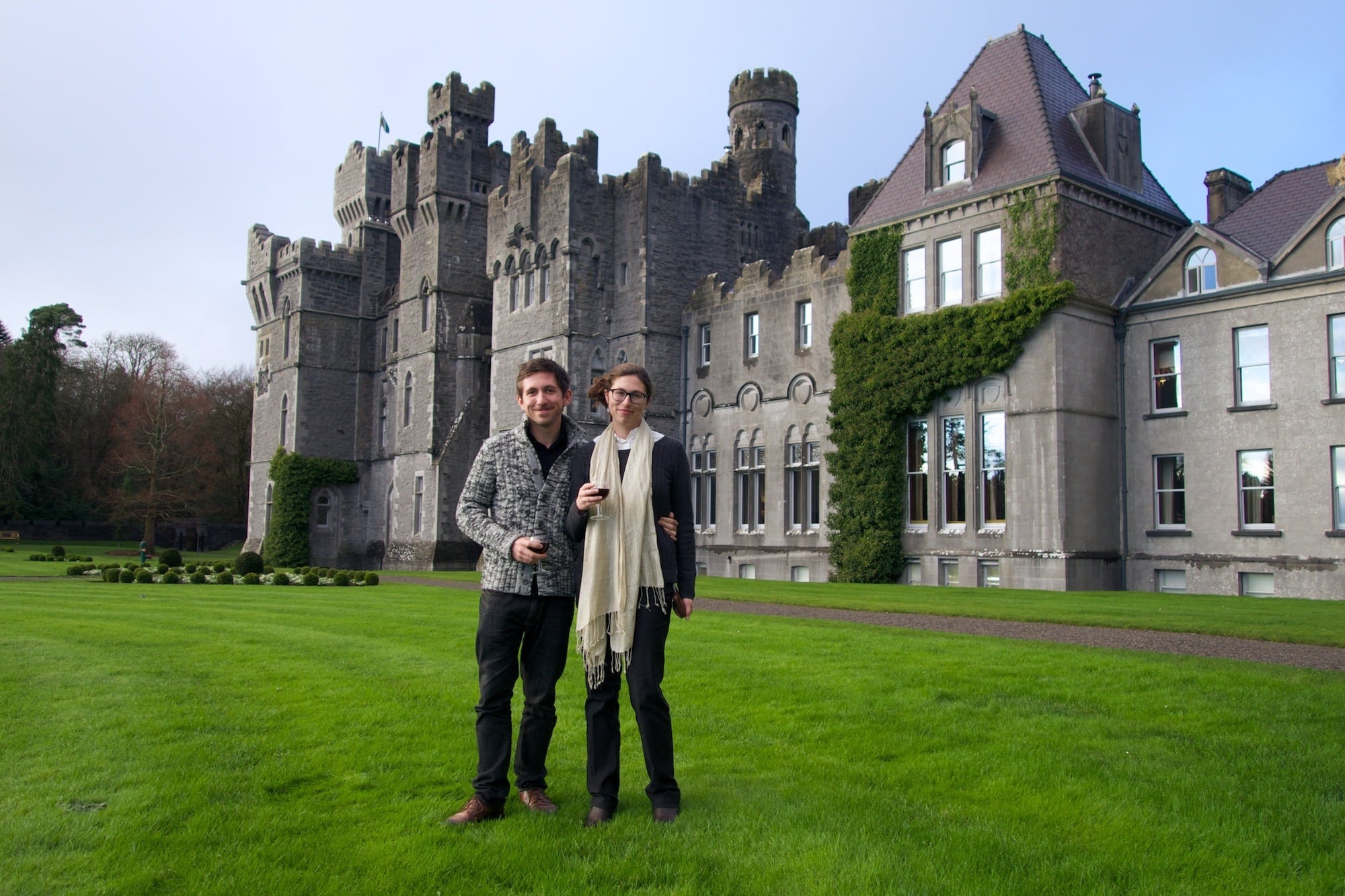 Other than the Giant’s Causeway, our top choice for this trip was to spend some time on the Wild Atlantic Way, a driving route that follows the coastline for much of western Ireland. For various reasons (including, sadly, the Great Famine), western Ireland is the least densely populated region of the island and the Wild Atlantic Way captures some of that wild isolation. We started our morning in Sligo, where we had stayed in a design hotel called The Glasshouse, and made our way down to Westport on the motorway.

From there we started out onto the Wild Atlantic Way (from hereon the WAW) and cruised along small rural highways through the Connemara peninsula. It’s mostly just empty beaches that stretch for miles and sheep farms. (Somewhere around Sligo, Max said of all the sheep we’d seen, he wanted a black one… and then as we were trundling along we actually saw a black sheep!!) Eventually there were no houses, no cars, no people, no powerlines, nothing. It was really amazing, especially when we rounded a corner in the Doolough Pass and saw the lakes Doo Lough and Glenullin Lough.

We arrived at Ashford Castle late in the afternoon on the 13th and were immediately giddy over the sheer castle-yness of it. A liveried doorman met us at our car to escort us to reception. The hotel clerk gave us a brief tour of the castle and led us through many twists and turns of hallways and stairs to our room, where she asked if she could send up some mulled wine for us to relax with. (Um, yes please.)

We briefly unpacked, read more about the various amenities and activities offered by the castle, and then went to our (lovely) afternoon tea service. We finished the day with dinner in the dungeon (OK, basement really, but they called it that) where we chose from no less then 12 different kinds of potato preparations, and a walk around the grounds where Max spent an hour taking photographs in the dark.

Max had a giddy night without much sleep because we had planned a boat tour, skeet shooting, and falconry the next day (!!!). Unfortunately the shooting instructor was elsewhere for the morning, but we had a great time on our boat tour and with our two Harris’ hawks, Uisce and Stoker. We both thoroughly enjoyed our time with our hawks – they would fly to and from our hands in exchange for small bits of beef or chicken. Very cool and highly recommended.

When Max was finally able to tear himself away from Ashford, we headed down to Doolin via the WAW. Again, incredible scenery and a gorgeous coastline.  A little after the sun set, the clouds cleared just enough that the sky wasn’t completely dark, right when we got to Black Head, a rocky, amazing beach near a big landmass called the Burren. Max got some really incredible photos before the light went. Doolin itself turned out to be soo tiny, with basically a couple of pubs, a lot of (closed for the season) B&Bs and a tourist shop or two. The first pub we walked into had just five locals in it (we got the proverbial glare from the regulars), and though the food sounded decent, we were just too creeped out to stay, and we ended up wandering down the lightless main roadway until we found another pub that was a bit more lively and was more inclined to serve us. Unfortunately despite being the “centre of traditional music” and signs everywhere saying “Music nightly!”, none of the pubs had music because it was a Thursday in the low season. Walking back we realized we had missed the third pub in town because it had nobody in it at all.

Last but not least on our list of sights we had to see were the Cliffs of Moher, perhaps better known to you as the Cliffs of Insanity in The Princess Bride. (If you don’t know the movie, go watch it, right now, because it is the best.) The Cliffs were pretty incredible but the most impressive thing may have been the wind — it pushed us uphill a few times. Actually, scratch that. The most impressive thing was the sea spray, which actually came all the way the 700+ foot cliffs, launched itself over the edge, and managed to keep several areas of the path along the top constantly moist. It was crazy. Also unbelievable: the sea foam littering the sheep pasture near an even higher area of the Cliffs. It dotted the whole field for at least 50 feet way from the cliff face.

Driving back to Dublin from the west coast, we stopped at the Rock of Cashel, the ruins of a cathedral dedicated to St. Patrick from the 12th-15th centuries. It wasn’t quite what we expected, but it was a good break. We then headed to Kilkenny, which was a cute little town with pretty lights and a good food scene. Mulled wine, a cool Irish design store, and pasta refueled us for the rest of the road to Dublin. Hilariously, after a week with a car in Ireland, about an hour away from Dublin it occurred to us that we could listen to the radio. We felt pretty dumb, but at least our last hour of driving was pretty fun (even the programmes in Irish).

All in all we had a great time in Ireland and are looking forward to more beer, more sheep, and definitely more castles sometime in the future!