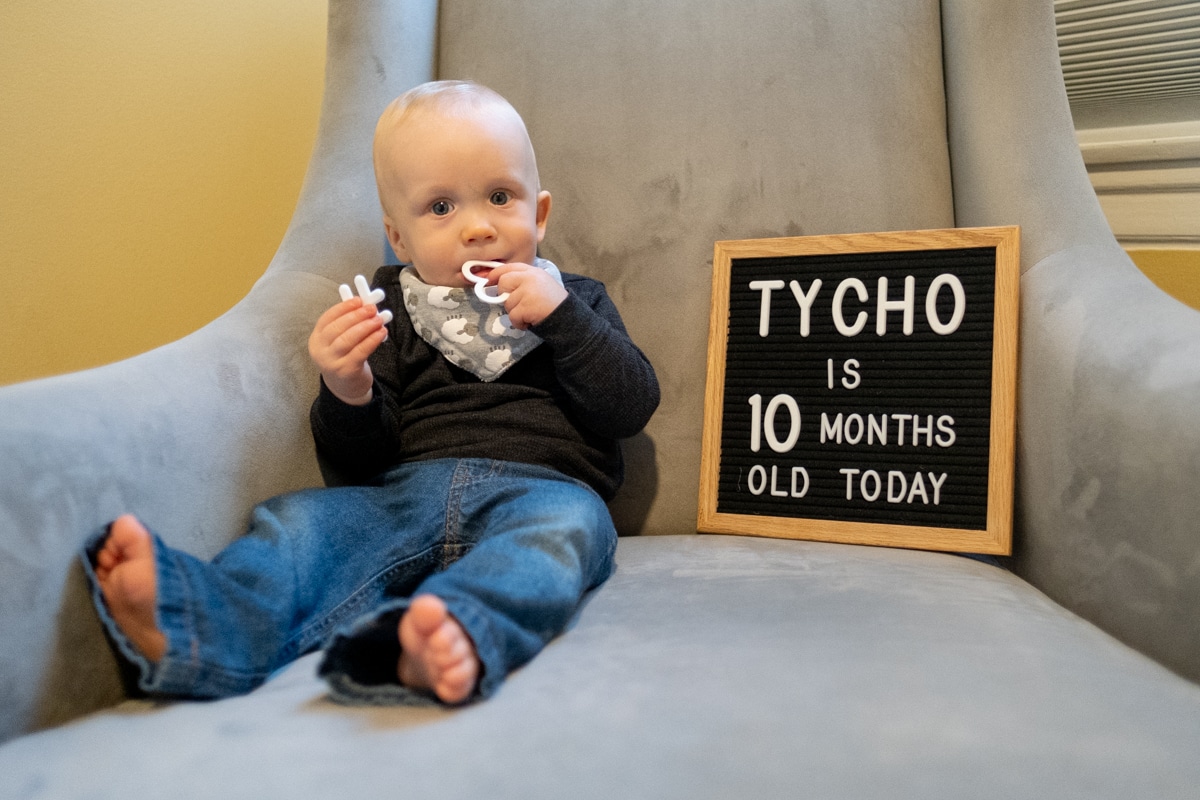 Tycho started this month largely trapped in the living room and now he’s got the freedom of the house! He wants to investigate everything. He can pull himself up on anything, but he especially loves the wine fridge and the freezer drawer. He can kneel to pick up toys or move on to the next big thing. He will let go after standing up, but within a second or two usually grabs back on… but he’s much more stable with just the slightest support than he was even a couple of weeks ago. He’s so proud of himself, but always turns back to Mama and Daddy to make sure we’re there. (Always, kiddo, always.)

We had so many mind-expanding adventures this month – museums, art exhibits, hikes. It’s been a blast seeing him enter this whole new world! All of a sudden, as he sat with his legs out in front of him making his opinions about his toys known, we realized that he’s barely a baby anymore – he’s almost a little kid! It doesn’t help that he’s so long now that he’s wearing 12-18 month shirts. Before we know it, he’s going to be standing and walking and running and starting kindergarten and doing homework and going to college and leaving the nest and MEEP.

Mom and Tycho started a new morning ritual this month of going to Pinhole Coffee when they open around 7, to have a coffee and hang out with the baristas and a new baby friend. Getting him out playing with other kids has been great this month – we’ve been to music class, swim class and baby sign language classes a few times and he’s been loving the ability to crawl over and say hi to all his new friends. (And steal their toys, while letting them steal his. Sharing is caring!)

News this month: We suspect Tooth #5 is coming, but he won’t let us look too closely. 3 and 4 are still descending. He loves to blow raspberries back and forth with us. And…. he’s sleeping through the night!!!! Mostly. He puts himself back to sleep most of the time, but not always. It’s weird and wonderful and somehow we’re just as tired.

On the menu this month: artichokes, amaranth, shrimp, raspberries, cabbage, millet, cereal, udon, and more… we decided it’s time to just feed him and not stress out about it!