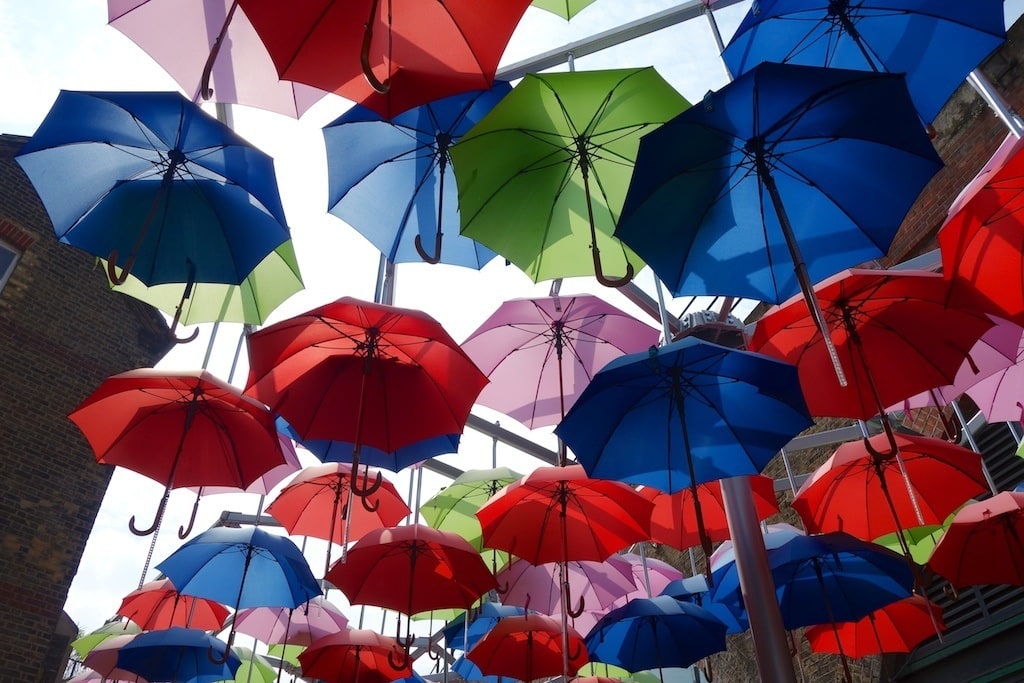 We flew to London in the late afternoon of the 22nd. We thought we had allowed enough time for finding aquavit and cloudberry jam in duty free, but time got away from us and suddenly we were running through the terminal and freaking out at the length of the passport control line we had (in)conveniently forgotten about. Thankfully, although we didn’t get to the gate until it was supposed to have closed, the boarding area was still full of people waiting to get on – so we boarded without any problems and with really nice aquavit to boot!

The 23rd was an amazing day. We somehow created a perfect little London itinerary for ourselves that just felt excitingly English. After a bit of a lazy morning (we had several of those here), we headed off to the Borough Market on a recommendation from Max’s sister. Great market with tons of fruit and veg vendors, cheese stalls, and more. We started with a prosecco mint spritzer, continued with a guest cider half pint from one of the cider vendors, and then took one along with us for lunch. We grabbed a cheese and onion pie at Pieminister Pies and wandered along the south bank of the Thames in Southwark until we found a nice place to eat our pie and drink our cider. (Begin the exciting English ways!) We popped into the Tate Modern for a spin around the galleries before heading up to Fortnum and Mason for afternoon tea.

Fortunum and Mason doesn’t kid around about Tea. It’s a full afternoon event which they say replaces lunch and/or dinner. And since it comes with basically an unlimited amount of food, it’s very possible that it’s the only meal you’ll need. We celebrated Kristan’s birthday a bit early here, and the pianist played Happy Birthday while the staff brought out a slice of yellow and red circus cake. That, combined with scones, petits fours, finger sandwiches, and approximately five liters of tea made for a very full couple. We somehow made it out on our two feet, went to the British Museum, where Kristan promptly caught a cold and needed to go to sleep for 12 hours.

London’s weather mirrored our sick state on Friday and rained all day long. We continued our tour of London’s great coffee scene, lounged around the flat, and ended up watching The World’s End at Leicester Square.

On Kristan’s birthday proper, we started with brunch at the New Zealander-owned Kopapa and then took the train to Bath for some aquatic historical reenactment. Pretty much everywhere was full of people, but we had fun checking out the ruins of the Roman baths (word to the wise: don’t drink the water from the sacred spring) and going to the modern spa accessing the hot springs. Plus we had pavlova for birthday dessert in a throwback to Kristan’s other British Empire adventure!

By the time it got to the actual Bank Holiday (August 26), we were so worn out we took it pretty easy. We hung out in Regent’s Park and read books that talked about hanging out in Regent’s Park, then had ramen before seeing Agatha Christie’s The Mousetrap in the West End. It was a killer!

The next day we got our groove back and wandered all the way from Hyde Park Corner to the V&A Museum, where we saw an 80s club fashion exhibit and the Natural History Museum, where we saw the crowds. We spent the afternoon getting lost in Harrods, but thankfully we found the pizzeria before we got too hungry. Somehow we ended up at the Ritz Bar, which was impressively expensive – $30 cocktail, natch. We tried maintaining our retail excursions by going to Savile Row, but we only managed the Burberry nearby. Making our way towards home we came across an Ice Bar, which we clearly had to go to since Max had never been to one. The best part was the Foursquare special that made us linger in the Ice Bar’s normal bar, because we had a great aquavit/cloudberry jam cocktail there… inspiration for future cocktail parties at home!

Our last day in London we went to Camden Town for the markets (too crowded and repetitive for us) and food (same), then tried going to Hampstead Heath by bus. It mostly worked, but we ended up spending most of our park time just trying to get to the park. But we got lemonade from two cute little British kids on the way! (For the record, seven-ty sounds a lot like 7p to us.)

And so concluded Max and Kristan’s 2013 adventures in Europe!