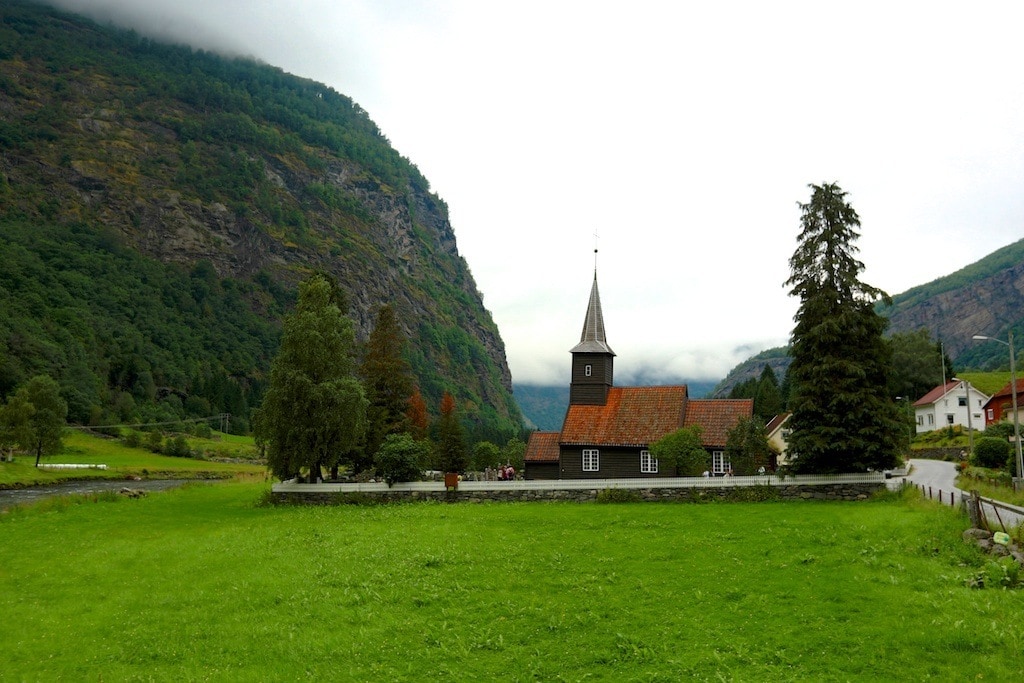 So… Flåm. The thing to do in Flåm is to take the tiny train up up up the mountain to Myrdal. It’s the steepest railway in Europe and it’s AMAZING.

Or so we’re told.

But! We had a great plan to go kayaking in the Aurlandsfjord, because it’s so still and beautiful and surrounded by mountains…. We walked to the water and found the kayaking company… but of course they were all booked too because of the hordes of tourists.

So at this point we were feeling pretty silly for not figuring this out instead, and not sure what to do with ourselves. Thankfully, Irving, the nice guy running the kayak shop that day, suggested we rent bikes instead, and offered to walk us to the bike shop since he was headed that way. (He explained to us that he had to take a boat around to the other side of one of the beautiful mountains to pick up some kayakers, because the tunnel linking Flåm to Bergen was closed because of a recent major accident.)

Irving pointed out a couple of good rides on the map for us, before telling his buddy at the bike shop to take care of us. Soon we were off pedalling through Flåm! We biked through the mountain valley where Flåm is located before beginning our climb up to Rjoandefossen, a large waterfall on the Rallarvegen bike route. (Kristan is super excited to say we biked some of Rallarvegen!)

Then an amazingly easy (if scary) ride back down, through Flåm proper, past the tourist centre, and then out and around the fjord, where we stopped and had a much needed snack of various cheeses, rye crackers, and fruit. A little bit more cycling and our ride was done!

Despite our snack we were still pretty hungry, so we popped back into the cruise ship for a hearty lunch. (Food is very expensive in Norway!!) Then we wandered around the tourist centre some more before taking in another great Flåm sight: the Aegir Brewery!! It’s designed after a Viking great hall, complete with a huge freestanding fireplace towering in the middle, and they served tasting flights of their beers. AWESOME!

We finished off the day, tired but content, with cappuccinos and a cinnamon pastry at the Fretheim hotel, a venerable old wood hotel that is so beautiful and classy that we hope to stay there in the future!