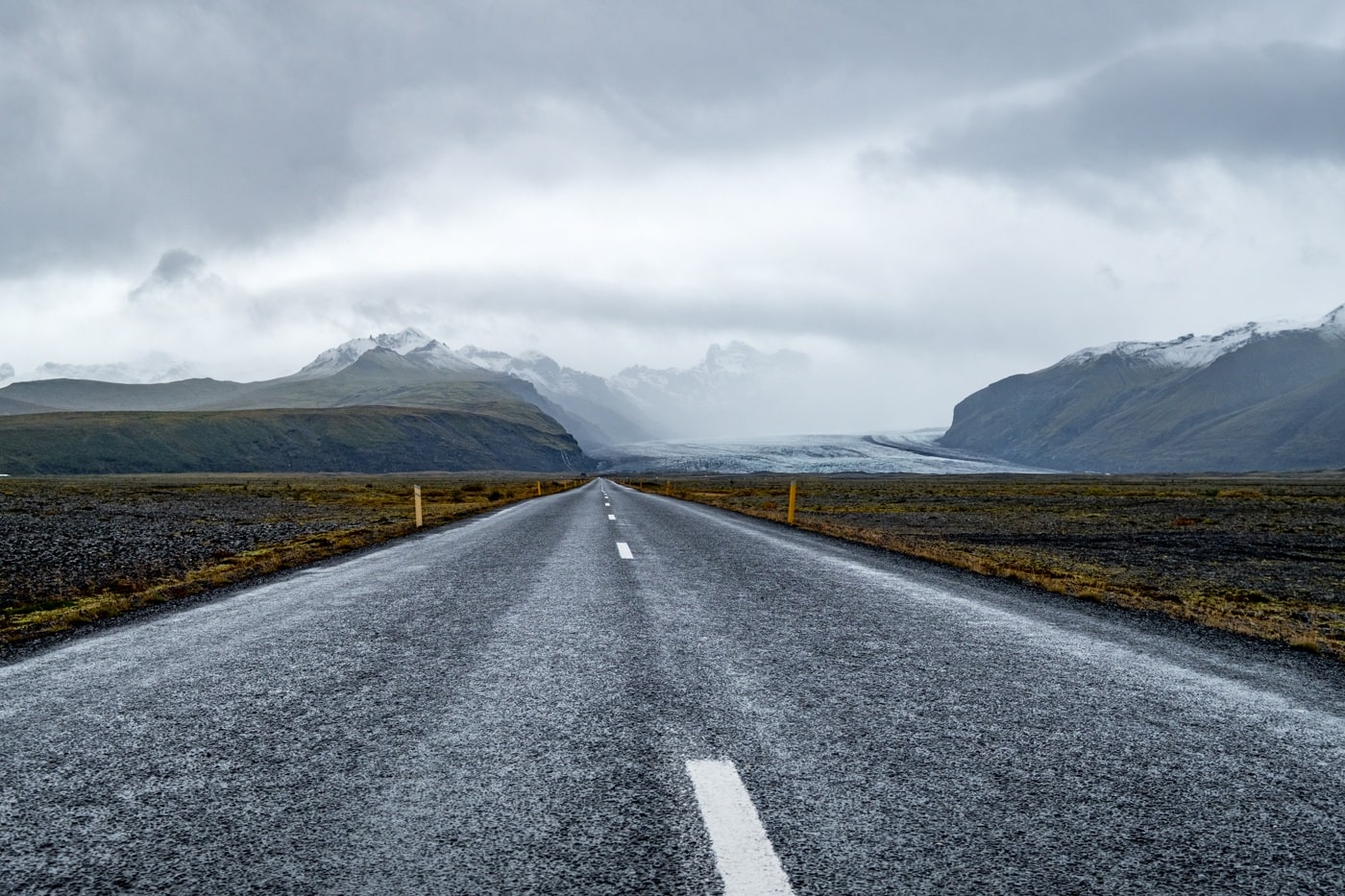 Iceland. Where to start? Once upon a time, we went to Iceland in the dead of winter and– oh, you’ve already heard that story? Well this one starts where that one ends, with a desire to get out of Reykjavik and see more of the country, but in a more appropriate and reliable car….

We’re about to begin a great adventure, traveling the Ring Road across the rugged and dramatic landscapes of Iceland. Our camper van will travel east from Reykjavik, up and around the island, before returning south to Reykjavik – a journey of approximately 1500 kilometers.

Today we started on the Ring Road from Reykjavik. We’re bringing plenty of supplies with us in our Mercedes Vito schooner, including four bags of pasta, three cans of baked beans, and a half eaten package of harðfiskur – a long-lasting food recommended by the local guides. Visited Geysir and Gullfoss in the late afternoon, escaping the rain with a coffee at the Gullfoss cafe. Morale is high.

Spirits low after cold temperatures in the night and several failed attempts to filter the coffee in the morning. We perk up after the surprise discovery that our 2 liter bottle of sparking water is actually apple (eple) flavored. Rain in the morning but it mostly cleared before we reached Seljalandsfoss. Very good weather at Skogarfoss, so we rested in the hills for a couple of hours before moving on.

In the evening we came across a group of campers in Vík who shared warmth and companionship with us. Kristan has taken well to camp cooking and improvised a Tuscan white bean soup using a can of Heinz vegetarian baked beans and a bunch of kale. Morale is good, though we foresee problems with finding enough ammo for our cameras.

Late start today. The cold has been bitter and the rain intermittent. We stopped at a small general store called Icewear to see if we could purchase the ubiquitous woolens used by the experienced local guides, but no luck. Our route today took us through one dramatic landscape after another, from moss balls to black sand as far as the eye could see. Hiked to Svartifoss after lunch; surprised to realize it’s actually fall here.

We considered exploring Jökulsárlón, but with heavy rains and gale force winds we decided to rest for only for a coffee before pushing on to Höfn, soaked and only slightly caffeinated. Morale is fair.

Today we set a strenuous pace to get from Höfn to Lake Myvatn before dark, while still seeing as much of the eastern fjords as possible. We encountered our first gravel road, stopped for soup in Breiðdalsvík, and pushed to reach Dettifoss before dark. Finally dry after yesterday’s rain but quite cold. Attempts to warm up with tea were not very successful and we realized the camera battery charger wasn’t working.

As we reached Myvatn we found our proposed camping spot was closed and we scrambled to find a place for the night, settling on Vogahraun when we realized they had a pizza place. Pizza was a welcome change for dinner, but with the camera battery charger broken, morale is low.

Busy day. We hiked through Dimmuborgir and up Hverfjall before checking out Grjótagjá cave. Had lunch and a dip at the Myvatn Nature Baths before getting on the road to Akureyri. Made a very quick stop at Góðafoss, as we needed to reach Akureyri before 6pm to buy a universal battery charger that might work.

We were a mere 20 kilometers out as we crested a hill with a nice view of the longest fjord in Iceland directly below us. The way down looked as though it would be very steep. Suddenly the engine of the schooner made a terrible racket and died; we coasted down with no power steering until finally we found a hint of a shoulder to pull over in.

After some laughter and only a little bit of time, we were able to arrange for a new schooner, a place to stay in Akureyri and even a ride into town…. Despite everything, we have a great night. Morale is improving.

Successfully traded our broken schooner for a new one; as a 4×4 the new camper schooner should serve us even better for the remaining journey. We picked up a new camera charger at the local supply station, Akureyri airport, thanks to a very helpful trader in Reykjavik.

We got a late start but still managed to make it to Hvammstangi before dark. Fellow travelers tell us of a nearby way station where we can find fresh fish soup instead of using our dwindling supplies, but fail to mention the treacherous terrain. Although we reach the way station, we found we’d punctured one of the schooner’s wheels and needed to return immediately. Morale is low.

Safely made it back to Hvammstangi and make food in the shelter of the campground common area. Drank a bottle of red wine with dinner. Morale improving.

Woke up to the schooner rocking in the high winds and driving rain. Tire completely flat; couldn’t repair it and decided to use the spare. With the schooner impaired, we kept to the well-traveled roads. We chose to hire an Icelandic guide to help us explore a glacier in the afternoon and later made camp alongside a peaceful bay in Borgarnes.

After the stress of the previous day, a large batch of Tuscan white bean soup and an Icelandic beer or two are appreciated, as are the glimmers of the Northern Lights we discover around midnight. Morale improving.

Hired a local to repair the flat tire while we rest with a coffee. Morale improving.

Slowly made our way to Þingvellir National Park, stopping at Akranes along the way. Found a beautiful restaurant to spend the evening in before setting up camp in an open field. Northern Lights soon cover the sky above the schooner like a surreal dream. The Ring Road continues to provide wonders and surprises! Morale is high.

Max and Kristan returned to Reykjavik happy campers. Despite some hardships along the way, Max and Kristan were successful in completing their journey around Iceland. The fortitude and determination that had served Max and Kristan so well on the Ring Road proved equally valuable in Reykjavik, where they were able to purchase a beautiful sweater and chocolate after a long walk around the harbor. Later successes included fish and chips, noodle soup, ice cream and – most notably – beer.