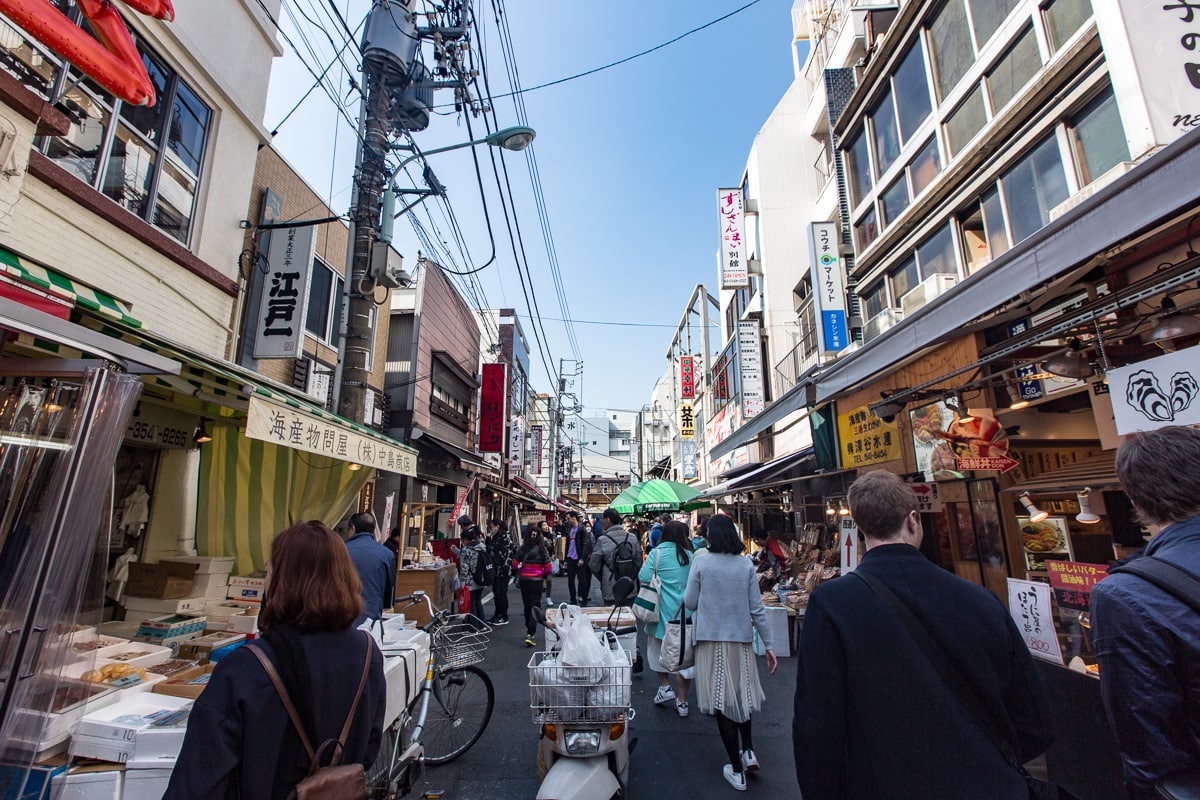 A few weeks ago Kristan mentioned how she wished we could go to Japan this year, because she wanted to see the Tsukiji Fish Market before it moves at the end of 2016. We didn’t really see how that would be possible but when another trip we had planned fell through and we discovered we could get fly to Tokyo on American for a really reasonable amount of miles, we looked at each and said “Let’s do it!” Somehow we never thought we’d go to Japan with less than a month’s notice, but despite it being cherry blossom season and a peak tourist time, we had no problem with last minute bookings or even with a couple of mid-trip itinerary changes!

We hit Tokyo running in the early evening, walking around Ginza and getting our first round of soba yamakake (Kristan) and tenzaru don (Max) for dinner. (This would be a recurring food theme.) We woke up fairly early the next morning and made our way to Tsukiji, grabbing a couple of onigiri on the way to Kristan’s delight (another recurring theme) and meandering around the outer market for awhile nibbling on all sorts of goodies before heading into the market proper. Tsukiji is of course the largest wholesale fish market in the world but in a word:

It was so much bigger and crazier than we imagined and we weren’t even there during the main selling time (they don’t allow tourists in from 6-9am). With electric carts zooming around and burly men heaving huge slabs of fish and carcasses and water everywhere it was just overwhelming to take in – so much so that when we finally left it was because Kristan’s senses couldn’t handle it anymore and she just had to get out! Thankfully we happened across a small park we had noted down for its cherry trees and we had our first blossom viewing (aka hanami) picnic as a way to rest.

The rest of the day was a whirlwind of walking – through Ginza and the Matsuya department store, to Tokyo Station’s Studio Ghibli store on “Character Street”, around Shinjuku National Garden (where Kristan tried to eat a futomaki as big as her fist, but it didn’t work out), around the Imperial Palace amidst the evening runners, and finally back through Ginza for our first fancy Japanese bar, where we had sakura (cherry blossom) liqueur and Japanese whiskey.

We headed out of Tokyo for a few days, then returned for more Ghibli, more hanami, more sushi and more fancy bars. (We really stuck to our priorities this trip!) Our last two nights in Tokyo (and of our trip) were spent at the Park Hyatt, a stark contrast to our first two nights at a compact business hotel in Ginza. Our room on the 46th floor had a spectacular view of Western Tokyo, and while the haze never cleared quite enough, we were told we could see Mt Fuji in the distance on a clear day. We had a great time here – everything from the panoramic views of the city, the New York Bar, rooftop pool, pillow menu, and minibar full of Japanese whisky. Oh, and did we mention the toilets yet? Who knew that Japan lead world technology in cameras, rice cookers, and toilet seats?

The Ghibli museum was adorable, with a super fun short about mouse sumo wrestlers (A Sumo Wrestler’s Tail) that was so well done that you didn’t even need to know Japanese to understand and appreciate. We stopped at a bird cafe on our way back to the hotel, like a cat cafe but with birds in enclosed areas so they can’t go after your food. Because Tokyo and because bird cafe. Despite having tea there, our next stop was Verve Coffee in Shinjuku Station, continuing our trend of visiting coffee shops just after they open and chatting up the owners.

We had had sushi on and off – box sets for the train and hanami picnics, a couple of sampler sets in restaurants – but our last two nights in Tokyo were the pinnacle of our sushi explorations. The first omakase at Kyubey was pretty casual and not much different from our favorite nice place in San Francisco – even down to the elderly Japanese guy with a slightly-difficult-to-understand-over-the-restaurant-buzz accent – but our second omakase at Sawada was truly amazing. We lost track after the thirtieth piece or so, but we started with sashimi before moving on to nigiri, with a few vegetable and cooked courses interspersed throughout. Everything was very fresh and seasonal, from a spring vegetable maki to refresh our palates to whitebait wrapped in a sakura leaf and more. Sawada-san is clearly an expert and sitting there with just four other people was intimate but not overwhelming. It was the perfect way to wrap up our trip: Max got the tuna sampler he’d dreamed of while Kristan finally realized that tuna isn’t the worst, as long as it’s good chutoro!