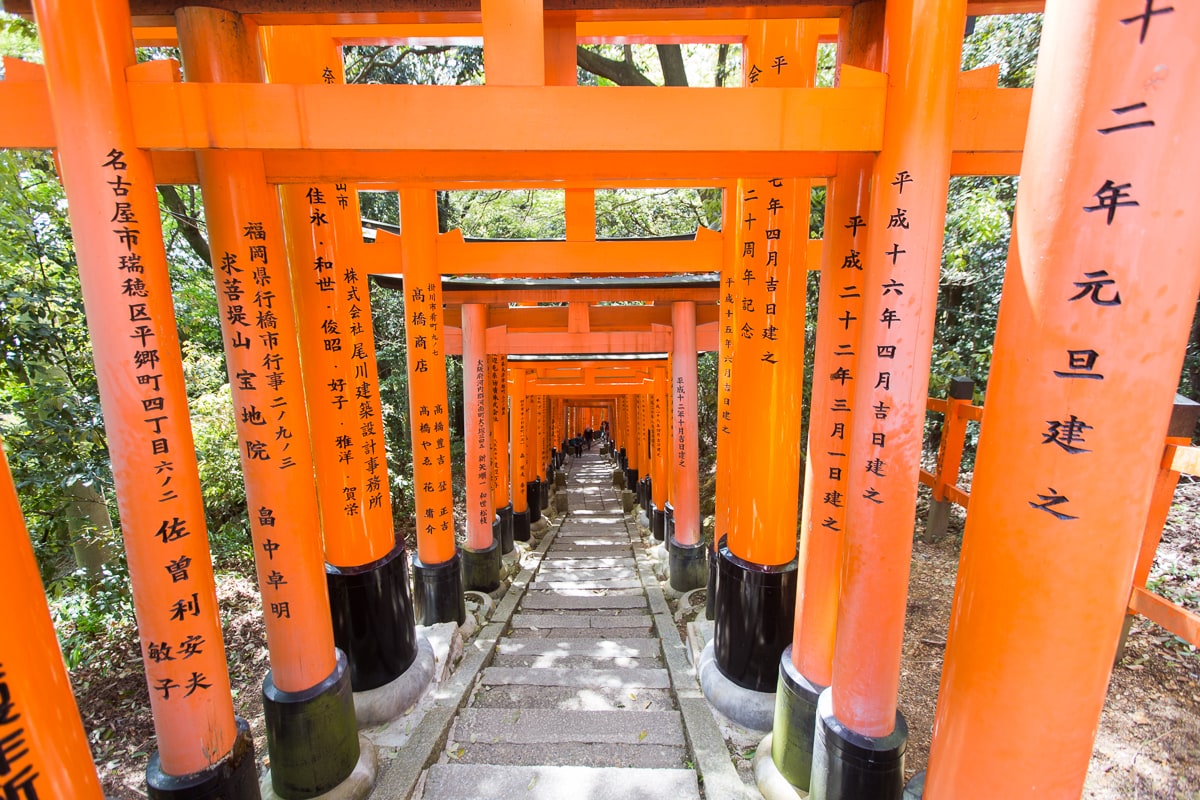 After a couple of days in Tokyo we hopped on a bullet train to Kyoto, which was such a smooth and comfortable ride that we were surprised to find it over! Our first stop – before we even dropped off our luggage – was Haradanien Gardens. We had heard that the cherry trees there were still in full bloom and given that it was drizzling with a stormy forecast, we wanted to make sure we got in a little more hanami while the hanami-ing was good. Once we crested the short hill at the garden’s entrance it was like we had entered a magical world of blossoms….

Despite the rain we weren’t the only ones enjoying the gardens and although occasionally the paths were a little too crowded for our liking, the people watching was often as good as the blossom viewing! At one point we stumbled across a semi-professional photo shoot of a young woman with the blossoms. She just kept making the silliest faces and we couldn’t help doing some similar shots of our own.

We headed next to our ryokan in Arashiyama, an area on the west side of Kyoto. (A ryokan is a traditional inn that usually has Japanese style rooms with tatami mats on the floor and bedding that is brought out for the night.) When we arrived our personal attendant led us to our room, checked us in and brought tea and a small snack, which was a lovely way to settle in. Our ryokan was over a hot spring, so we had a chance to go to the outdoor public baths before dinner. Watching the hills grow misty in the twilight and listening to the rain softly coming down while sitting in a hot mineral bath was just about perfect!

For dinner we had kaiseki, a style of Japanese cuisine featuring very seasonally inspired small plates over many courses. Served one course at a time by our attendant, we were soon overwhelmed by the amount of food – much of it new to us, though we can’t remember anything specifically strange – and were glad to have had the advice of setting aside courses when we had had enough and not necessarily when we had eaten it all! We probably wouldn’t have made it past course seven without that and there were twelve – phew! (Check out our food post for all the pictures!)

The next morning we woke up early and went for a walk in our yukata robes by the river and through a nearby bamboo grove. Although we looked a little out of place in our robes – wearing them outside is more of a spa town thing – we still had a fun time with them. Plus we worked up an appetite for our first traditional Japanese breakfast back at the ryokan! After breakfast we headed to our hotel in Southern Higashiyama, on the southeast side of Kyoto. We had a whirlwind couple of days there – watching the Miyako Odori geisha dances in Gion, exploring a couple of shrines with our flytographer Lucas, eating ramen and drinking amazing sake flights at Yoramu, climbing all the way to the top of a mountain during a shrine visit, souvenir shopping at a little liquor store we found in one of Kyoto’s small alleys. Fun fact: the best place to buy Japanese whiskey is… Japan. (We really cemented that fact in our minds the next day when we went to the Yamazaki Distillery.)

After so much exploring, our couple of days in Matsumoto were much more relaxed. It’s much smaller than Kyoto, so tourists are less common and it felt friendlier rather than professionally hospitable. (Except for that time Kristan tried to ask for a little more tea at a sushi-ya and got professionally glared at, an experience thankfully made up for by the loveliness of the gentleman running the little soba shop we went to for lunch. His food was better too….) We looked at the castle, poked around in some shops, bought sake and rice crackers at a 7-Eleven to enjoy while looking at the Alps from our hotel room, and basically kept it chill before we headed back to Tokyo to go all out again!

And in case you’re wondering how we manage all this, we put together a few of our most useful travel resources for this trip!